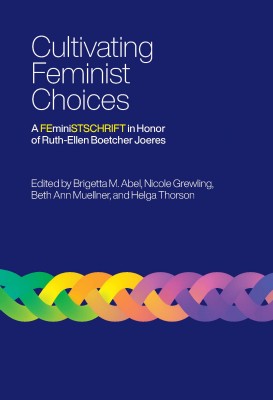 $31.95
In Stock
By Abel, Brigetta M.; Grewling, Nicole; Muellner, Beth Ann; Thorson, Helga
This has been added to your cart!
Something went wrong, please contact the Bookstore for assistance.

This book is a Festschrift in honor of Ruth-Ellen Boetcher Joeres, written by several former graduate students, whom she supervised over her years as professor of German Studies at the University of Minnesota, and some of her colleagues and collaborators. The book pays tribute to Joeres’s influence on the German Studies profession as well as to her influence on the contributors’ lives and the feminist choices they have made. Dr. Joeres is known for her feminist scholarly contributions to women’s writing in the eighteenth and nineteenth century, including her book "Respectability and Deviance: Nineteenth-Century German Women Writers and the Ambiguity of Representation" (U of Chicago Press, 1998), and her collaborative feminist editing practices as editor of both "Signs: Journal of Women in Culture and Society" and the "Women in German Yearbook." Together with Angelika Bammer, she edited a volume "On the Future of Scholarly Writing: Critical Interventions" (Palgrave MacMillan, 2015) that navigates the terrain of academic writing practices and calls for a focus not only on what scholars write but on how they write it. Because of her critical interventions in the realm of academia in general and feminist studies and German studies, in particular, as well as her influence on the lives of the next generations, this book will be of interest beyond those who know her personally.