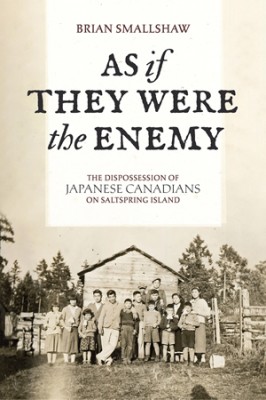 As if They Were the Enemy

$24.95
In Stock
By Smallshaw, Brian
This has been added to your cart!
Something went wrong, please contact the Bookstore for assistance.

A microhistory of the dispossession of the Japanese Canadians who were living on Saltspring Island at the time of the uprooting during World War II. Like the approximately 22,000 other Japanese who were forcibly removed from the coast, their land was taken from them and sold without their consent, but several things make the Saltspring story unique: the largest and most valuable of the properties ended up in the hands of the local agent for the Custodian of Enemy Property, and this was contested in a court case in the 1960s that gained nationwide attention. As well, one of the families that was uprooted returned to the island, something that happened only rarely elsewhere. The book examines the legality of the dispossession, while also looking at the impact on individual families and the wider society on Saltspring Island. This publication, unless otherwise indicated, is released under a Creative Commons Attribution-NonCommercial-ShareAlike 4.0 International (CC BY-NC-SA 4.0) License. This means that you may copy, distribute, display, and perform the work, and make derivative works and remixes based on it only for non-commercial purposes. Distribution of derivative works may only be made under an identical license that governs the original work.