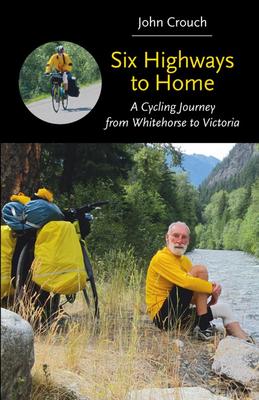 SIX HIGHWAYS TO HOME: A Cycling Journey from Whitehorse to Victoria

$20.00
Not In Stock
By Crouch, John
This has been added to your cart!
Something went wrong, please contact the Bookstore for assistance.

The summer after he turned 70, John Crouch fl ew to Whitehorse in the Yukon, got on hisbicycle and pedalled 2500 kilometers along six highways back to his home in Victoria, BC. Crossing the southern Yukon on the historic Alaska Highway, he then descended the province of BC on five of its most spectacular roads. He rode through mountain ranges,atop wide plateaux and beside rushing rivers. He met interesting people from around the world, encountered wildlife, witnessed the massive devastation of the mountain pine beetle and suffered up the incline of one of the province’s most brutal climbs. Six Highways to Home is a captivating account of Crouch’s journey. Simply told, his story tells of the day-by-day details of being on the road, coupled with fascinating historical details about little known places and the people who came before. It’s an adventure that will transport the reader into the heart and vastness of one of Canada’s most spectacular landscapes.

﻿John Crouch has cycled, hiked, climbed and run most of his life. As a competitive masters athlete he has been national champion in both the triathlon and duathlon and a world champion in the duathlon. His recent long-distance bike tours include: a 1,700-km, 15-day solo ride from Victoria to San Francisco; a 1,400-km circle of Washington State and an 800-km circle from Victoria to Victoria via the Fraser Canyon and the Sea-to-Sky Highway. John lives in Victoria, BC.