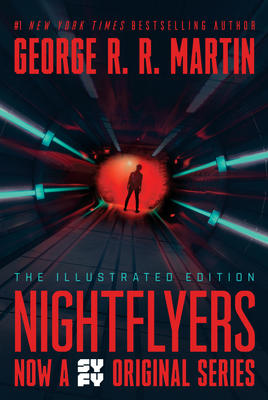 $12.99
In Stock
By Martin, George R R
This has been added to your cart!
Something went wrong, please contact the Bookstore for assistance.

Soon to be an original series on SYFY, a gorgeous illustrated edition of a classic novella from the #1 bestselling author of A Game of Thrones—a chilling mystery set on a seemingly haunted spaceship.

Featuring fifteen original illustrations, this is the definitive edition of an electrifying tale that combines the deep-space thrills of Alien, the psychological horror of The Shining, and, of course, the inimitable vision of George R. R. Martin.

When a scientific expedition is launched to study a mysterious alien race, the only ship available is the Nightflyer, a fully autonomous vessel manned by a single human. But Captain Royd Eris remains locked away, interacting with his passengers only as a disembodied voice—or a projected hologram no more substantial than a ghost.

Yet that’s not the only reason the ship seems haunted. The team’s telepath, Thale Lasamer, senses another presence aboard the Nightflyer—something dangerous, volatile, and alien. Captain Eris claims to know nothing about the elusive intruder, and when someone, or something, begins killing off the expedition’s members, he’s unable—or unwilling—to stem the bloody tide.

Only Melantha Jhirl, a genetically enhanced outcast with greater strength, stamina, and intelligence than other humans, has a chance of solving the mystery—and stopping the malevolent being that’s wiping out her shipmates.

But first she has to keep herself alive.

George R. R. Martin is the #1 New York Times bestselling author of many novels, including those of the acclaimed series A Song of Ice and Fire—A Game of Thrones, A Clash of Kings, A Storm of Swords, A Feast for Crows, and A Dance with Dragons—as well as Tuf Voyaging, Fevre Dream, The Armageddon Rag, Dying of the Light, Windhaven (with Lisa Tuttle), and Dreamsongs Volumes I and II. He is also the creator of The Lands of Ice and Fire, a collection of maps featuring original artwork from illustrator and cartographer Jonathan Roberts, and The World of Ice & Fire, with Elio M. García, Jr., and Linda Antonsson. As a writer-producer, he has worked on The Twilight Zone, Beauty and the Beast, and various feature films and pilots that were never made. He lives with the lovely Parris in Santa Fe, New Mexico.

David Palumbo is a Philadelphia-based painter known primarily for fantasy and horror genre illustration. A graduate of the Pennsylvania Academy of Fine Art, Palumbo began his career showing in galleries in 2003, but his primary focus has long been centered on illustration. His images have won numerous honors and been featured in exhibits from New York to Paris.