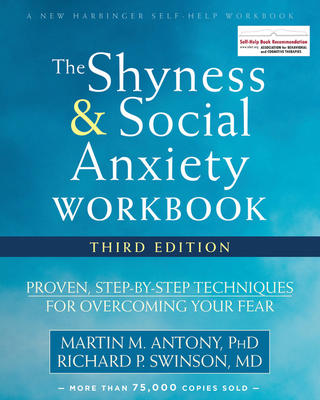 The Shyness and Social Anxiety Workbook

$34.95
Not In Stock
By Antony, Martin M; Swinson, Richard P
This has been added to your cart!
Something went wrong, please contact the Bookstore for assistance.

There’s nothing wrong with being shy. But if shyness or social anxiety keeps you from building meaningful relationships with others, advancing in your education or career, or simply living your best life,The Shyness and Social Anxiety Workbook offers a comprehensive program to help you confront your fears and become actively involved in the world.

If you are shy or socially anxious, you may dread going to parties, speaking in front of crowds or people you don’t know, going to job interviews, and other critical life situations. You aren’t alone. In fact, studies show that millions of people suffer from a social anxiety disorder. Unfortunately, you can’t hide from some social situations—no matter how much you wish you could. But you don’t have to go on suffering silently. The good news is thereare proven-effective techniques you can start using right away to help ease your anxiety or shyness and start living the life you were meant to live: a life where fear doesn’t get in the way of reaching your goals.

This fully revised and updated third edition incorporates breakthrough new research and techniques for overcoming social phobia, including a new chapter on mindfulness-based treatments, updated information on medications, and an overview of treatment-enhancing technological advances. As you complete the activities in this workbook, you'll learn to find your strengths and weaknesses using self-evaluation, explore and examine your fears, create a personalized plan for change, and put your plan into action through gentle and gradual exposure to the very social situations that cause you to feel uneasy. After completing this program, you'll be well-equipped to make connections with the people around you. Soon, you'll be on your way to enjoying all the benefits of being actively involved in the social world.

If you’re ready to confront your fears to live an enjoyable, satisfying life, this new edition ofThe Shyness and Social Anxiety Workbook offers a comprehensive program to help you get started. What are you waiting for?

This book has been awarded The Association for Behavioral and Cognitive Therapies Self-Help Seal of Merit—an award bestowed on outstanding self-help books that are consistent with cognitive behavioral therapy (CBT) principles and that incorporate scientifically tested strategies for overcoming mental health difficulties. Used alone or in conjunction with therapy, our books offer powerful tools readers can use to jump-start changes in their lives.

Martin M. Antony, PhD, is professor in the department of psychology at Ryerson University in Toronto, ON, Canada, where he also served as department chair and graduate program director. Previously, he was founding director of both the Anxiety Treatment and Research Clinic and the Psychology Residency Program at St. Joseph’s Healthcare Hamilton. He is also past president of the Canadian Psychological Association. Antony has published thirty books, and more than 225 scientific articles and book chapters, mostly in areas related to cognitive behavior therapy (CBT), social anxiety, obsessive-compulsive disorder (OCD), panic disorder, specific phobia, and perfectionism. He has received a number of prestigious awards, and he is a Fellow of the Royal Society of Canada, the American and Canadian Psychological associations, the Association for Psychological Science, the Association for Behavioral and Cognitive Therapies, and the Canadian Association of Cognitive and Behavioural Therapies. Antony has trained and supervised numerous students in psychology, psychiatry, social work, and other disciplines. He has given more than 300 workshops and presentations to professionals across four continents. He has also been interviewed, featured, or quoted more than 450 times in various print, radio, television, and online media outlets, includingCBC, CNN, CTV, The Globe and Mail, National Post,Toronto Star,The New York Times,The Washington Post,Chatelaine, O, The Oprah Magazine, Reader’s Digest, Prevention, Scientific American Mind, and many others.

Richard P. Swinson, MD, is professor emeritus and past chair of the department of psychiatry and behavioural neurosciences at McMaster University in Hamilton, ON, Canada. Previously, he was medical director of the Anxiety Treatment and Research Clinic, and psychiatrist-in-chief at St. Joseph’s Healthcare Hamilton. He is a fellow of the Royal College of Physicians and Surgeons of Canada, and the Royal College of Psychiatrists in the UK. He was awarded an inaugural Distinguished Fellowship of the Canadian Psychiatric Association in 2006, and Distinguished Life Fellow of the American Psychiatric Association in 2017. His research interests lie in the theory, assessment, and treatment of anxiety disorders, particularly OCD and social anxiety disorder (SAD). He has published more than 200 peer-reviewed papers, thirty book chapters, and ten books. Swinson has held numerous research grants since 1966, and has been an invited speaker at many conferences around the world on anxiety disorders and substance use disorders. He also chaired the steering committee for the Canadian Anxiety Treatment Guidelines Initiative, leading to the publication ofCanadian Clinical Practice Guidelines for the Management of Anxiety Disorders in 2006.