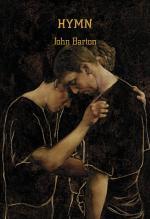 $3.00 $19.00
In Stock
By Barton, John
This has been added to your cart!
Something went wrong, please contact the Bookstore for assistance.

A journey in search of love through the contemporary homoerotic male body.

Improvising on a variety of poetic forms and traversing disparate landscapes — from Belfast to the clear-cuts of Vancouver Island, from the subterranean heat of Jules Verne's Iceland to the ventriloquism of the Alberta Rockies' echoing eastern slopes — John Barton documents the path of the male body in the search for love in an increasingly unstable, supposedly tolerant contemporary world. Hymn, stokes the fires of homoerotic romantic love with its polar extremes of intimacy and solitude.

… though he files all forethought of the unknown life now going

on without him, a life he confuses with his own, his life promiscuous
however rearranged his surfaces or clean his drawers, the unclarifying

distractions of the body portentous in his downfall, the downfall
of his own body a matter of time, but thinking of the man who left

the accidental man come between them, the man he may yet become
it is impossible for him not to sing them unwashed hymns of praise.