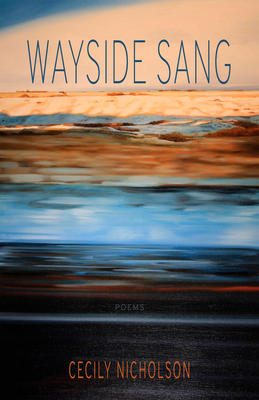 $3.00 $16.95
In Stock
By Nicholson, Cecily
This has been added to your cart!
Something went wrong, please contact the Bookstore for assistance.

Wayside Sang concerns entwined migrations of Black-other diaspora coming to terms with fossil-fuel psyches in times of trauma and movement. This is a poetic account of economy travel on North American roadways, across Peace and Ambassador bridges and through the Fleetway tunnel, above and beneath Great Lake rivers between nation states. Nicholson reimagines the trajectories of her birth father and his labour as it criss-crossed these borders in a study that engages the automobile object, it’s industry, roadways and hospitality, through and beyond the Great Lakes region.

Engaging a range of discursive fields to form the metrics of this project, she is interested in the intersection of various artistic practices and how being in relation to them can lend dimension to page and text-based efforts. Consider Charles Campbell’s Transporter project, begun initially as a visual investigation of the phenomenon of forced migration, or Camille Turner’s various “sonic walks” which present narratives that explore the complexities of Black life in Canada amid a “landscape of forgetting” Black history, and Khari McClelland’s embrace of music as a “transportation device” uncovering the experiences of fugitive Blacks crossing into Canada.

This study is, in part, a matter of strengthening relations and being situated despite displacement. It is an effort to be relevant at a time of rebellion as Black networks, community, and aesthetics gain new qualities. The work is attentive to, entwined with, and influenced by, Indigenous resurgence and poetics. It looks to Anishinaabeg, Haudenosaunee, and Attawandaron presence and histories – to Indigenous memory as a constant to land, as constitutive elements of Nicholson’s poetic practice.

This book was once in the fields and frequented bars. It rolls out of factories onto roads travelling north across the border and returning again to some understanding of home. There are passengers and possessions – travelling musicians – memories of the Caribbean – brothers determined by border crossings – daughters reassembled.

Cecily Nicholson, from small-town Ontario via Toronto and South Bend, relocated to the Pacific coast almost two decades ago. On Musqueam-, Squamish-, and Tsleil-Waututh-occupied lands known as Vancouver, she has worked, since 2000, in the Downtown Eastside neighbourhood, most recently as administrator for the artist-run centre and mental health resource, Gallery Gachet. A part of the Joint Effort prison abolitionist group and a member of the Research Ethics Board for Emily Carr University of Art and Design, Cecily was also the 2017 Ellen Warren Tallman Writer in Residence at Simon Fraser University. She is the author of Triage and From the Poplars, winner of the 2015 Dorothy Livesay Poetry Prize.