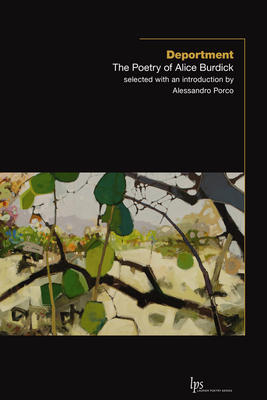 $3.00 $18.99
In Stock
By Burdick, Alice; Porco, Alessandro
This has been added to your cart!
Something went wrong, please contact the Bookstore for assistance.

Deportment is a selection of poems – surreal, cerebral, and defiant – by Alice Burdick. Burdick examines the dangers of dogma, women’s rights, and environmental degradation in biting satires, moving elegies, and anti-sentimental lyrics filled with mischievous wordplay. The selection includes some of Burdick’s most iconic poems as well as rare work from the beginning of her career in 1990s Toronto and previously unpublished material. Burdick’s later poetry, more expansive in form and subject matter, addresses motherhood, the rural landscape, and sex and desire at middle age. Deportment makes the case for Alice Burdick as one of Canada’s best poets, alongside figures such as Lisa Robertson, Karen Solie, and Sina Queyras.

Alessandro Porco’s introduction situates Burdick’s early work within the Toronto small press scene, focusing on her fugitive chapbooks, broadsides, and literary ephemera while highlighting her formative relationships with Victor Coleman and Stuart Ross. He traces her move from Toronto to Nova Scotia in the early 2000s and the impact of publishing from the social and spatial margins of Canadian literature.

In her afterword, Burdick reflects on everyday life – as a poet and citizen, daughter and mother –in both the zombieland of downtown Toronto and the alien geography of Eastern Canada. She explores how the comparative speed, sound, and density of urban and rural spaces have shaped her literary imagination.