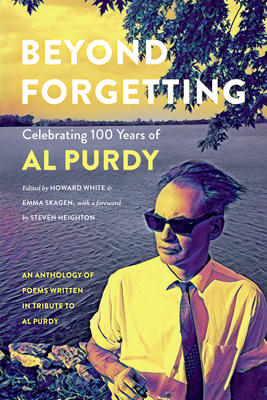 $3.00 $22.95
In Stock
By White, Howard; Skagen, Emma; Heighton, Steven
This has been added to your cart!
Something went wrong, please contact the Bookstore for assistance.

“... without a doubt the greatest poet English Canada has ever produced.”

“A hundred years from now, one of the few Canadian poets whose work will still be read will be Al Purdy.”

Al Purdy (1918–2000), known as Canada’s unofficial poet laureate, wrote poetry that anyone could read. Having come from working-class roots with little in terms of formal education, he wrote in a colloquial style and with a rowdy yet sensitive poetic persona that has captured the hearts of many. Purdy was exceptional in the attention he paid to the geography and history of Canada; rather than using his Canada Council grant to write from Europe like many of his contemporaries, he took a trip to Canada’s Arctic where he wrote some of his most well-loved poems. His self-built A-frame in the Ontario township of Ameliasburgh also connected him to the land and history of that place, a literary legacy that lives on through the A-frame writer-in-residence program.

Purdy wrote over three dozen collections of poems, two memoirs, a novel, a number of collections of his correspondence and anthologies. He was awarded the Governor General’s Literary Award for poetry twice, first in 1965 for The Cariboo Horses and then in 1986 for The Collected Poems of Al Purdy. He was an officer of the Order of Canada and a member of the Order of Ontario. The League of Canadian Poets honoured him with the Voice of the Land Award, created specifically to recognize his tremendous contribution to Canadian poetry.