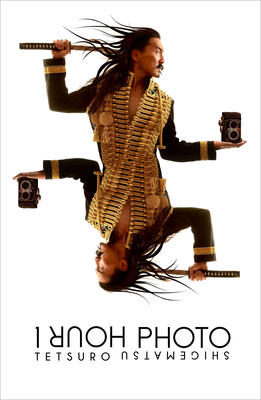 $16.95
Low In Stock
By Shigematsu, Tetsuro
This has been added to your cart!
Something went wrong, please contact the Bookstore for assistance.

From the award-winning Canadian playwright, performer, and radio broadcaster Tetsuro Shigematsu comes 1 Hour Photo, the follow-up to his acclaimed one-man play Empire of the Son, which was nominated for six Jessie Richardson Theatre Awards. Shigematsu’s outstanding new play, another multifaceted portrayal of a singular figure, tells the story of Mas Yamamoto, a man whose life was swept up by the major currents of the twentieth century:

"The year is 1977, the place planet Earth, and even though some of you were not yet born, believe me when I say it was very cool time in which to be alive … Some of the things you know and love today were just being introduced. A movie named Star Wars came out. The U.S. Department of Defense launched a series of satellites you know as GPS. 1977 was the year the Apple II went on sale. You wouldn’t have wanted the Apple I. It was made of wood. Seriously! … But for my money, the coolest thing to launch in 1977 was one of the very first digital cameras. It was the size of a Volkswagen Beetle, if you can believe it, but here’s the cool thing: they called it Voyager."

From growing up in a fishing village on the banks of the Fraser River in British Columbia, to being confined at a Japanese Canadian internment camp during the Second World War, to helping build the Distant Early Warning Line in the Canadian Arctic during the height of the Cold War,1 Hour Photo’s Mas Yamamoto is a grand theatrical persona, his life saturated with the most vivid colours of our times.

Tetsuro Shigematsu is a Canadian playwright, comedian, and radio broadcaster. Originally trained in the fine arts, he found a creative outlet writing for CBC Television’sThis Hour Has 22 Minutes. Then, in 2004, he became the first person of colour to host a daily national radio program in Canada when he took overThe Roundup on CBC Radio, for which he co-wrote and co-produced nearly a thousand hours of network programming. He has written and produced more than fifty pieces of radio drama as well as the feature filmYellow Fellas (2007). He is currently a Vanier scholar and Ph.D. candidate at the University of British Columbia. Follow him on Twitter (@tweetsuro) or visit his website, shiggy.com.