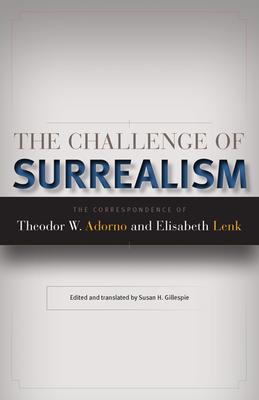 The Challenge of Surrealism

$39.95
Not In Stock
By Lenk, Elisabeth; Adorno, Theodor W Adorno; Gillespie, Susan H
This has been added to your cart!
Something went wrong, please contact the Bookstore for assistance.

The correspondence between the philosopher Theodor W. Adorno and his politically active graduate student Elisabeth Lenk offers fresh insights into both Adorno’s view of surrealism and its relation to the student uprisings of 1960s France and Germany. Written between 1962, when Lenk moved to Paris and persuaded an initially reluctant Adorno to supervise her sociology dissertation on the surrealists, and Adorno’s death in 1969, these letters reveal a surprisingly tender side of the distinguished professor. The correspondence is accompanied by a selection of documents that bring additional depth and context to the letters and their engagement with the art and politics of the period.

Filling in the background of Adorno and Lenk’s lively exchange, the volume includes new translations of classic essays by Walter Benjamin (“Surrealism: Last Snapshot of the European Intelligentsia”) and Adorno (“Surrealism Reconsidered”), along with a collection of short prose readings by Adorno and the writer-scholar Carl Dreyfus and three original essays by Lenk: her afterword to Paris Peasant by Louis Aragon, her Introduction to the German edition of Charles Fourier’s The Theory of the Four Movements and the General Destinies, and her incisive essay “Critical Theory and Surreal Practice.” An Introduction by Lenk’s student, the contemporary writer and critic Rita Bischof, points to the continuing challenge of surrealist politics.

This remarkable body of correspondence appears here in English for the first time, as do Adorno and Dreyfus’s surrealist readings and the essays by Lenk. Together, they provide a rich mine of critical material for reassessing the significance of the surrealist movement and its successors.

Susan H. Gillespie is founding director of the Institute for International Liberal Education at Bard College, where she is vice president for special global initiatives. She has translated prose and poetry from German to English.