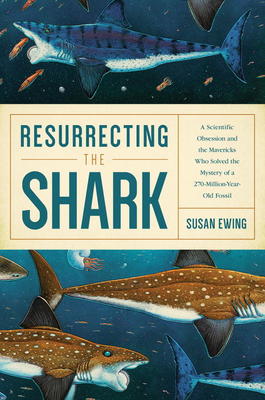 $23.95
Low In Stock
By Ewing, Susan
This has been added to your cart!
Something went wrong, please contact the Bookstore for assistance.

In 1993, Alaskan artist and paleo-shark enthusiast Ray Troll stumbled upon the weirdest fossil he had ever seen—a platter-sized spiral of tightly wound shark teeth. This chance encounter in the basement of the Natural History Museum of Los Angeles County sparked Troll’s obsession with Helicoprion, a mysterious monster from deep time.

In 2010, tattooed undergraduate student and returning Iraq War veteran Jesse Pruitt became seriously smitten with a Helicoprion fossil in a museum basement in Idaho. These two bizarre-shark disciples found each other, and an unconventional band of collaborators grew serendipitously around them, determined to solve the puzzle of the mysterious tooth whorl once and for all.

Helicoprion was a Paleozoic chondrichthyan about the size of a modern great white shark, with a circular saw of teeth centered in its lower jaw—a feature unseen in the shark world before or since. For some ten million years, long before the Age of Dinosaurs, Helicoprion patrolled the shallow seas around the supercontinent Pangaea as the apex predator of its time.

In this groundbreaking book, Susan Ewing reveals these revolutionary insights into what Helicoprion looked like and how the tooth whorl functioned—pushing this dazzling and awe-inspiring beast into the spotlight of modern science.

Susan Ewing is the author of The Great Alaska Nature Factbook, The Great Rocky Mountain Nature Factbook, and Going Wild in Washington and Oregon, as well as two children’s books. Her nonfiction articles and essays have appeared in Salon, Pacific Standard, Outside Bozeman, Gray’s Sporting Journal, Big Sky Journal, The Seattle Times, and other publications. Born and raised in Kentucky, she graduated from University of Alaska-Fairbanks and now lives in Bozeman, Montana.