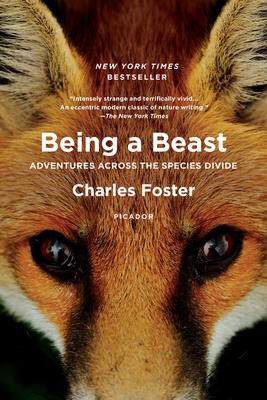 $22.99
Not In Stock
By Foster, Charles
This has been added to your cart!
Something went wrong, please contact the Bookstore for assistance.

Charles Foster set out to know the ultimate other: the non-humans, the beasts. And to do that, he tried to be like them, choosing a badger, an otter, a fox, a deer, and a swift. He lived alongside badgers for weeks, eating earthworms and learning to sense the landscape by smell rather than sight. He tried to catch fish in his teeth while swimming like an otter, rooted through London garbage cans as an urban fox, was hunted by bloodhounds as a red deer, nearly dying in the snow. And he followed the swifts on their migration route over the Strait of Gibraltar, discovering himself to be strangely connected to the birds.

A lyrical, joyful, and completely radical look at the life of animals—human and other—Being a Beast mingles neuroscience and psychology, nature writing and memoir to cross the boundaries separating the species.

CHARLES FOSTERis a Fellow of Green Templeton College at the University of Oxford. He is a qualified veterinarian, teaches medical law and ethics, and is a practicing barrister. Much of his life has been spent on expeditions: he has run a 150-mile race in the Sahara, skied to the North Pole, and suffered injuries in many desolate and beautiful landscapes. He has written on travel, evolutionary biology, natural history, anthropology, and philosophy. His books includeTracking the Ark of the Covenant andThe Sacred Journey.