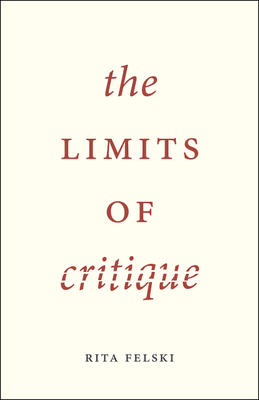 The Limits of Critique

$29.25
Not In Stock
By Felski, Rita
This has been added to your cart!
Something went wrong, please contact the Bookstore for assistance.

Why must critics unmask and demystify literary works? Why do they believe that language is always withholding some truth, that the critic’s task is to reveal the unsaid or repressed? In this book, Rita Felski examines critique, the dominant form of interpretation in literary studies, and situates it as but one method among many, a method with strong allure—but also definite limits.

Felski argues that critique is a sensibility best captured by Paul Ricoeur’s phrase “the hermeneutics of suspicion.” She shows how this suspicion toward texts forecloses many potential readings while providing no guarantee of rigorous or radical thought. Instead, she suggests, literary scholars should try what she calls “postcritical reading”: rather than looking behind a text for hidden causes and motives, literary scholars should place themselves in front of it and reflect on what it suggests and makes possible.

By bringing critique down to earth and exploring new modes of interpretation, The Limits of Critique offers a fresh approach to the relationship between artistic works and the social world.

Rita Felski is the William R. Kenan Jr. Professor of English at the University of Virginia and the editor of New Literary History. She is the author of several books, including, most recently, Uses of Literature and Literature after Feminism, the latter also published by the University of Chicago Press.