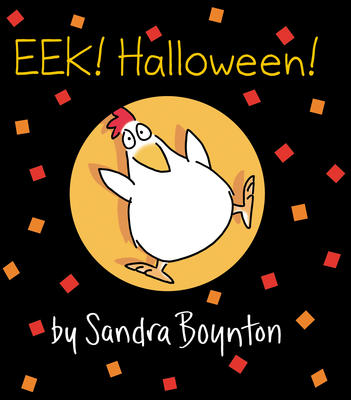 $10.95
Not In Stock
By Boynton, Sandra
This has been added to your cart!
Something went wrong, please contact the Bookstore for assistance.

A new addition to the Boynton on Board series, with over 21 million copies sold, Eek! Halloween! is all treat and no tricks, a journey with Boynton and her nutty characters through the tradition of Halloween.

It starts with an uh-oh—the chickens are nervous! Strange things are happening. One chicken saw a pumpkin with flickering eyes, another spied a mouse of enormous size. They all saw a wizard and a witch, and a spooky robot. “WHAT’S GOING ON HERE? WHAT DOES IT MEAN? / Relax, silly chickens! It’s HALLOWEEN!”

Sandra Boynton is a popular American cartoonist, writer, and songwriter. Since 1974, Boynton has written and illustrated over fifty children&s books and seven general audience books, including fiveNew York Timesbestsellers. More than 60 million of her books have been sold-"mostly to friends and family," she says. She has also written and produced five albums of award-winning children&s music. Three of her albums have been certified Gold, andPhiladelphia Chickens, nominated for a Grammy, has gone Platinum. She lives with her family on a farm in New England.