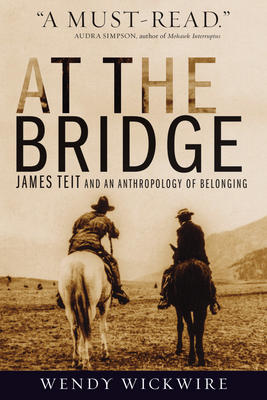 $34.95
In Stock
By Wickwire, Wendy
This has been added to your cart!
Something went wrong, please contact the Bookstore for assistance.

At the Bridge chronicles the little-known story of James Teit, a prolific ethnographer who, from 1884 to 1922, worked with and advocated for the Indigenous peoples of British Columbia and the northwestern United States. From his base at Spences Bridge, BC, Teit forged a participant-based anthropology that was far ahead of its time. Whereas his contemporaries, including famed anthropologist Franz Boas, studied Indigenous peoples as members of “dying cultures,” Teit worked with them as members of living cultures resisting colonial influence over their lives and lands. Whether recording stories, mapping place-names, or participating in the chiefs’ fight for fair treatment, he made their objectives his own. With his allies, he produced copious, meticulous records; an army of anthropologists could not have achieved a fraction of what he achieved in his short life. Wickwire’s beautifully crafted narrative accords Teit the status he deserves, consolidating his place as a leading and innovative anthropologist in his own right.