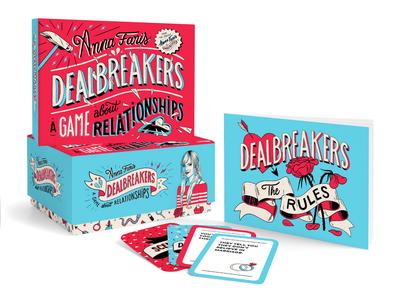 Dealbreakers: A Game About Relationships

$38.00
In Stock
By Faris, Anna; Boglio, Laurene
This has been added to your cart!
Something went wrong, please contact the Bookstore for assistance.

From the hit podcast Anna Faris Is Unqualified comes Dealbreakers, an irreverent party game that explores what happens in a romantic relationship after that initial swipe right.

Gather your friends (in person or on a video call), open your mind, and prepare to discover what you're really willing to accept from a romantic partner! What behavior or attribute is an insurmountable flaw and what might you be inclined to overlook? Judge potential soul mates and get to know your friends better as you examine the little things that can lead to love or frustration.

Each round begins with a scenario card that sets the scene, and players must each select a "dealbreaker" card they believe will convince the round's leader to abandon the date. But even the dealbreakers that seem intolerable on the surface might be excusable for the right person! As players explore these questions and collect points, they'll learn more than they ever thought about themselves, their friends, and, of course, how to avoid dating axe-murderers.

Anna Faris is an actress, producer, author, and host of the top-rated podcast Anna Faris Is Unqualified. Her recent acting credits include the MGM/Pantelion Films' remake of Overboard and the CBS comedy television series Mom. Faris produced and starred in The House Bunny and What's Your Number? Her other credits include the Scary Movie franchise, The Dictator, Observe and Report, Just Friends, Lost in Translation, Brokeback Mountain, Smiley Face, and the animated franchise Cloudy with a Chance of Meatballs. Her first book, Unqualified, is a comedic memoir of her life and Hollywood experiences. A native of Washington State, she lives in Los Angeles with her family.