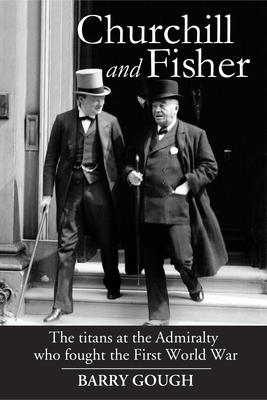 $39.95
In Stock
By Gough, Barry
This has been added to your cart!
Something went wrong, please contact the Bookstore for assistance.

A vivid study of the politics and stress of high command, this book describes the decisive roles of young Winston Churchill as political head of the Admiralty during the First World War. Churchill was locked together in a perilous destiny with the ageing British Admiral 'Jacky' Fisher, the professional master of the British Navy and the creator of the enormous battleships known as Dreadnoughts. Upon these 'Titans at the Admiralty' rested British command of the sea at the moment of its supreme test — the challenge presented by the Kaiser's navy under the dangerous Admiral Alfred von Tirpitz.

Churchill and Fisher had vision, genius, and energy, but the war unfolded in unexpected ways. There were no Trafalgars, no Nelsons. Press and Parliament became battlegrounds for a public expecting decisive victory at sea. An ill-fated Dardanelles adventure, 'by ships alone' as Churchill determined, on top of the Zeppelin raids on Britain brought about Fisher's departure from the Admiralty, in turn bringing down Churchill. They spent the balance of the war in the virtual wilderness.

This dual biography, based on fresh and thorough appraisal of the Churchill and Fisher papers, is a story for any military history buff. It is about Churchill's and Fisher's war — how each fought it, how they waged it together, and how they fought against each other, face to face or behind the scenes. It reveals a strange and unique pairing of sea lords who found themselves facing Armageddon and seeking to maintain the primacy of the Royal Navy, the guardian of trade, the succour of the British peoples, and the shield of Empire.

BARRY GOUGH, prize-winning and acclaimed historian and biographer, is a Fellow of Kings College London and Archives Fellow of Churchill College Cambridge. His Pax Britannica won The Mountbatten Literary Award of the British Maritime Foundation and he is author of numerous studies of sea power and imperial affairs. Gough is an Emeritus Professor at Wilfrid Laurier University and a resident of Victoria, BC.