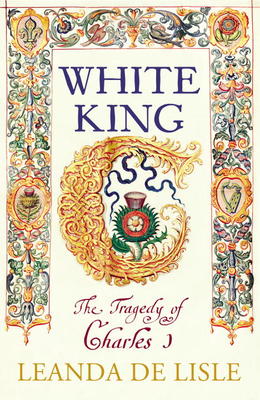 $27.99
Not In Stock
By de Lisle, Leanda
This has been added to your cart!
Something went wrong, please contact the Bookstore for assistance.

Drawing on lost royal letters from a closed archive, White King introduces us to Charles I as the monarch at the heart of a story for our times: a tale of populist politicians and the fall of the mighty, of religious hatreds and civil war, of the power of a new media and a maligned queen.

The reign of Charles I is one of the most dramatic in history. Yet Charles the man remains elusive. Too often he is recalled as weak and stupid, his wife, Henrietta Maria, as spoilt and silly: the cause of his ruin. This has bred not only contempt, but also indifference. Today’s readers have preferred the well-trodden reigns of the Tudors.

But Charles is revealed here as a complex and fascinating man who pays the price for bringing radical change; Henrietta Maria is a warrior queen and political player as extraordinary as any Tudor. Here too is the story of the cousins who befriended and betrayed them: Henry Holland, the king’s closest body servant, whose brother engineered the king’s fall, and Lucy Carlisle, immortalized in Alexandre Dumas’s Three Musketeers as the scheming Lady de Winter.

Epic in scale, White King is also a very human story, about the choices people make, and of the family man behind the image of the ‘white’ king, who on his execution was reviled as a traitor and murderer by some, but lauded by others as the people’s martyr.

Leanda de Lisle is the highly acclaimed author of three books on the Tudors and Stuarts, including the bestselling The Sisters Who Would be Queen and Tudor: The family story. A former weekly columnist on the Spectator, Guardian and Daily Express, she contributes t onumerous national publications. She lives in Leicestershire.