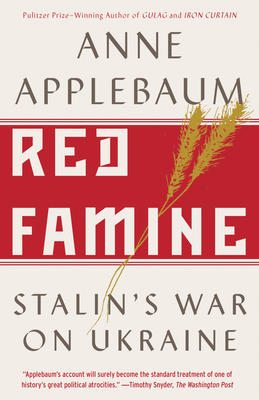 $24.00
In Stock
By Applebaum, Anne
This has been added to your cart!
Something went wrong, please contact the Bookstore for assistance.

Winner of the 2018 Lionel Gelber Prize

From the author of the Pulitzer Prize-winning Gulag and Iron Curtain, winner of the Cundill Prize and a finalist for the National Book Award, a revelatory history of Stalin's greatest crime.

In 1929, Stalin launched his policy of agricultural collectivization -- in effect a second Russian revolution -- which forced millions of peasants off their land and onto collective farms. The result was a catastrophic famine, the most lethal in European history. At least five million people perished between 1931 and 1933 in the U.S.S.R. In Red Famine, Anne Applebaum reveals for the first time that three million of them died not because they were accidental victims of a bad policy, but because the state deliberately set out to kill them. Applebaum proves what has long been suspected: that Stalin set out to exterminate a vast swath of the Ukrainian population and replace them with more cooperative, Russian-speaking peasants. A peaceful Ukraine would provide the Soviets with a safe buffer between itself and Europe, and would be a bread basket region to feed Soviet cities and factory workers.
When the province rebelled against collectivization, Stalin sealed the borders and began systematic food seizures. Starving, people ate anything: grass, tree bark, dogs, corpses. In some cases they killed one another for food. Devastating and definitive, Red Famine captures the horror of ordinary people struggling to survive extraordinary evil.

ANNE APPLEBAUM is a columnist for The Washington Post and Slate and contributes to The New York Review of Books. Her previous books include Iron Curtain, winner of the Cundill Prize and a finalist for the National Book Award; and
Gulag, winner of the Pulitzer Prize for Nonfiction and a finalist for three other major prizes. She lives in Poland with her husband, Radek Sikorski, a Polish politician, and their two children. The author lives in London, UK and Warsaw, Poland.