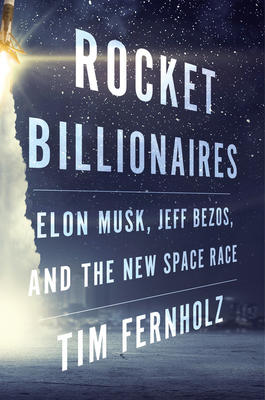 $40.00
Not In Stock
By Fernholz, Tim
This has been added to your cart!
Something went wrong, please contact the Bookstore for assistance.

The inside story of the new race to conquer space, as Elon Musk and Jeff Bezos spend billions of their own money to explore the final frontier

For the largerâ€‘thanâ€‘life personalities now staking their fortunes on the development of rocket ships, the new race to explore space could be a dead end, a lucrative opportunity — or the key to humanity’s salvation.

Elon Musk and Jeff Bezos take center stage in this fastâ€‘paced narrative as they attempt to disrupt the space economy, feed their own egos, and maybe even save the world. We also meet a supporting cast of equally fascinating entrepreneurs, from the irrepressible British mogul Richard Branson to satellite Internet visionary Greg Wyler. All are united in the profound conviction that commercial space transportation will transform our world for the better.

With privileged access to top executives at SpaceX, including Musk himself, as well as at Blue Origin, NASA, Boeing, Lockheed Martin, Orbital ATK, Virgin Galactic, Fernholz spins this highâ€‘stakes marathon into a riveting tale of rivalry and survival.

TIM FERNHOLZ is a reporter at Quartz and the host of the Quartz/Marketplace economics podcast, Actuality . He has been reporting on SpaceX since 2011 and was a Knight Journalism Fellow and a fellow at the New America Foundation in Washington, DC.