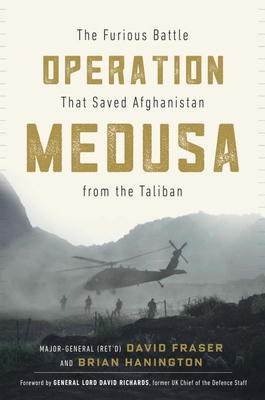 $32.00
Not In Stock
By Fraser, Major General David; Hanington, Brian; Richards, David
This has been added to your cart!
Something went wrong, please contact the Bookstore for assistance.

From the Canadian in charge of the joint military command in Kandahar Province in Afghanistan, this is the real on-the-ground story of one of NATO's bloodiest, most decisive and misunderstood operations: The battle of Panjwayi, the defining moment of "Operation Medusa."

In 2006, David Fraser was the Canadian general in charge of the joint military command in Kandahar Province, Afghanistan. Like the troops under his command, he was in no way ready for what happened on Friday, September 1st of that year. He had been woken the night before by his intelligence officers who informed him that the Taliban were amassing on all fronts for an all-out battle. The NATO Alliance was about to engage the enemy in the greatest and bloodiest battle of their 70-year history. And they were grossly outnumbered. At first the facts of Operation Medusa were deliberately withheld as classified, then muddied by imprecise and isolated personal accounts, exaggerated by rumour, misstated by ambition, or just rejected outright as irrelevant, the details of these events are still unknown by citizens of Canada and her allies. And yet the truth about those 15 agonizing days between September 2 and 17 is astounding. The secret agreements made in those two weeks, the expected death toll of Canadian soldiers, the wholesale changes to tactics made after the first engagement, the strafing of Charles Company by an American A-10, the contribution of the Afghan police, the discovery of drugs, the extent of unreported civilian casualties, and even Canadian and Allied reliance on the insights of village elders were classified and kept from public knowledge. And yet in international military circles, the Battle of Panjwayi was quickly hailed as the defining moment of Operation Medusa. Canadians were credited with nothing less than saving Afghanistan from falling under Taliban rule. Our military's strategy and tactics were soon studied in warfare colleges in the U.S., and practiced by Nato troops in exercises around the world. There is no one architect of Operation Medusa, but if anyone really had to point to the one person who could tell this incredible story, it is the Canadian General in charge of the joint military command.

Major General (ret'd) David Fraser is a major-general of the Canadian Forces. He was the commander of the
Multinational Brigade for Regional Command South in Afghanistan's southern provinces in 2006. One of the most decorated generals in Canadian Armed Forces history, Fraser was the commander of Operation Medusa in Afghanistan, the largest combat engagement of Canadian Armed Forces in more than 50 years. General Fraser was the Commandant of the Canadian Forces Staff College. After retirement, David Fraser has served as an executive with three different corporations, and has experience leading in both the battlefield and the boardroom. David Fraser is the recipient of the Order of Military Merit.

As a writer and strategic communications adviser, Brian Hanington has moved through government circles for some 40 years, writing for prime ministers, cabinet ministers, bishops, admirals, movie stars, knights and even His Holiness John Paul II. As a writer of business strategy, Hanington serves a select group of clients throughout the U.S. and the UK. Brian has also consulted on a wide variety of books including The Idea of Canada and Ingenious, both for Canada's Governor General David Johnston. He is currently chairman of Stiff, the Ottawa-based agency he founded in 1988.