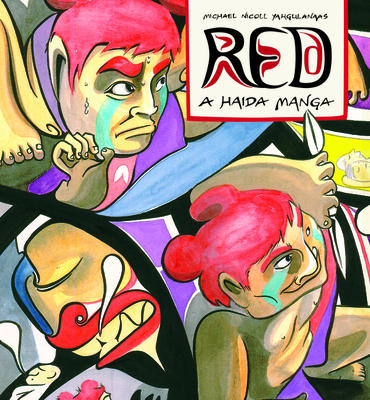 $19.95
In Stock
By Yahgulanaas, Michael
This has been added to your cart!
Something went wrong, please contact the Bookstore for assistance.

Referencing a classic Haida oral narrative, this stunning full-colour graphic novel documents the tragic story of a leader so blinded by revenge that he leads his community to the brink of war and destruction. Consisting of 108 pages of hand-painted illustrations, Red is a groundbreaking mix of Haida imagery and Japanese manga. Now available in paperback, the hardcover edition was nominated for the B.C. Bookseller’s Choice Award, a Doug Wright Award for Best Book and a 2010 Joe Shuster Award for Outstanding Canadian Cartoonist. It was also an Amazon Top 100 book of 2009.

Red is the prideful leader of a small village in the islands off the northwest coast of British Columbia. His sister was abducted years ago by a band of raiders. When news comes that she has been spotted in a nearby village, Red sets out to rescue his sister and exact revenge on her captors. Tragic and time- less, it is reminiscent of such classic stories as Oedipus Rex and Macbeth. Red is an action-packed and dazzling graphic novel that is also a cautionary tale about the devastating effects of rage and retribution.

Michael Nicoll Yahgulanaaschallenges native stereotypes through illustrative story telling. His artwork is informed by many years of dedication to public service and political activism, mostly on behalf of the Haida.Yahgulanaascreates pop-graphic narratives that riff on traditional Haida stories and painting techniques, and developed "Haida Manga"—the distinctive art form for which he is widely known. A trickster-like sense of humour contributes to his work’s appeal.Yahgulanaas’books includeFlight of the Hummingbird, A Tale of Two Shamans, The Last Voyage of the Black Ship, Hachidori, and—most recently—Red, a graphic novel published by Douglas & McIntyre in Fall 2009.

Michael Nicoll Yahgulanaashas exhibited in several major galleries, including the Bill Reid Gallery, the McMichael Gallery, the Museum of Anthropology, the Glenbow