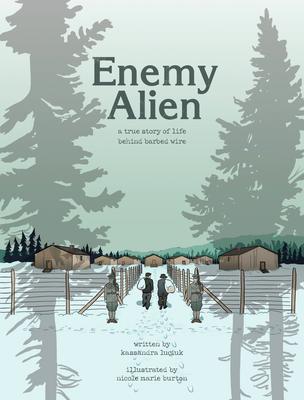 Enemy Alien: A Graphic History of Internment in Canada during the First World War

$21.95
In Stock
By Luciuk, Kassandra; burton, nicole marie
This has been added to your cart!
Something went wrong, please contact the Bookstore for assistance.

This graphic history tells the story of Canada’s first national internment operations through the eyes of John Boychuk, an internee held in Kapuskasing from 1914-17. The story is based on Boychuk’s actual memoir, which is the only comprehensive internee testimony in existence.

The novel follows Boychuk from his arrest in Toronto to Kapuskasing, where he spends just over 3 years. It details the everyday struggle of the internees in the camp, including forced labour and exploitation, abuse from guards, malnutrition, and homesickness. It also documents moments of internee agency and resistance, such as work slowdowns and stoppages, hunger strikes, escape attempts, and riots.

Little is known about the lives of the incarcerated once the paper trail stops, but Enemy Alien subsequently traces Boychuk’s parole, his search for work, his attempts to organize a union, and his ultimate settlement in Winnipeg. Boychuk’s reflections emphasize the much broader context in which internment takes place. This was not an isolated incident, but rather part and parcel of Canadian nation building and the directives of Canada’s settler colonial project.