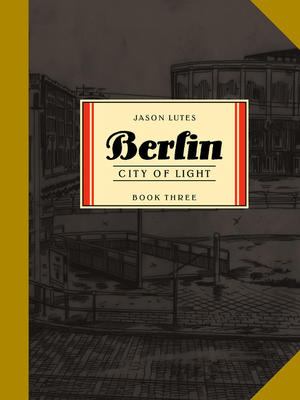 $29.95
In Stock
By Lutes, Jason
This has been added to your cart!
Something went wrong, please contact the Bookstore for assistance.

The third and final act of Jason Lutes’s historical fiction about the Weimar Republic begins with Hitler arriving in Berlin. With the National Socialist party now controlling Parliament, the citizenry becomes even more divided.

Lutes steps back from the larger political upheaval, using the intertwining lives of a small group of Germans to zero in on the rise of fascism and how swiftly it can replace democracy. The idle rich, the naïve bourgeoisie, and the struggling lower classes: all seek meaning in the warring political factions dividing their nation. He especially focuses on the Brauns—a working-class family torn apart by a political system that doesn’t care about them. Lovers couple and uncouple; families and friends share rituals and laughter; most of Berlin’s citizens go about their day with little sense of the larger threat to their existence. Meanwhile, the journalist Kurt Severing and the artist Marthe Muller watch in horror as their society begins a dizzying descent into extremism.

Lutes’ Berlin Book Three: City of Light is one of the most anticipated graphic novels of 2018, and the long-awaited conclusion to his beloved trilogy.

Jason Lutes was born in New Jersey in 1967 and grew up reading American superhero and Western comics. In the late 1970s he discovered Heavy Metal magazine and the tabletop role-playing game Dungeons & Dragons, both of which proved major influences on his creative development. Lutes graduated from the Rhode Island School of Design with a BFA in illustration, and in 1993 he began drawing a weekly comics page called Jar of Foolsfor Seattle’s The Stranger. Lutes lives in Vermont with his partner and two children, where he teaches comics at the Center for Cartoon Studies.