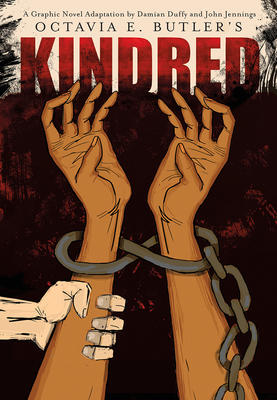 $29.95
In Stock
By Butler, Octavia E; Jennings, John; Duffy, Damian
This has been added to your cart!
Something went wrong, please contact the Bookstore for assistance.

More than 35 years after its release, Kindred continues to draw in new readers with its deep exploration of the violence and loss of humanity caused by slavery in the United States, and its complex and lasting impact on the present day. Adapted by celebrated academics and comics artists Damian Duffy and John Jennings, this graphic novel powerfully renders Butler’s mysterious and moving story, which spans racial and gender divides in the antebellum South through the 20th century.

Butler’s most celebrated, critically acclaimed work tells the story of Dana, a young black woman who is suddenly and inexplicably transported from her home in 1970s California to the pre–Civil War South. As she time-travels between worlds, one in which she is a free woman and one where she is part of her own complicated familial history on a southern plantation, she becomes frighteningly entangled in the lives of Rufus, a conflicted white slaveholder and one of Dana’s own ancestors, and the many people who are enslaved by him.

Held up as an essential work in feminist, science-fiction, and fantasy genres, and a cornerstone of the Afrofuturism movement, there are over 500,000 copies of Kindred in print. The intersectionality of race, history, and the treatment of women addressed within the original work remain critical topics in contemporary dialogue, both in the classroom and in the public sphere.

Frightening, compelling, and richly imagined, Kindred offers an unflinching look at our complicated social history, transformed by the graphic novel format into a visually stunning work for a new generation of readers.

Octavia Estelle Butler (1947–2006), often referred to as the “grand dame of science fiction,” was born in Pasadena, California, on June 22, 1947. She received an Associate of Arts degree in 1968 from Pasadena City College, and also attended California State University in Los Angeles and the University of California, Los Angeles. Butler was the first science-fiction writer to win a MacArthur Fellowship (“genius” grant). She won the PEN Lifetime Achievement Award and the Nebula and Hugo Awards, among others.

John Jennings is Associate Professor of Visual Studies at the University at Buffalo and has written several works on African-American comics creators. His research is concerned with the topics of representation and authenticity, visual culture, visual literacy, social justice, and design pedagogy. He is an accomplished designer, curator, illustrator, cartoonist, and award-winning graphic novelist, who most recently organized an exhibition/program on Afrofuturism and the Black Comic Book Festival, both at the Schomburg Center for Research in Black Culture at the New York Public Library.

Damian Duffy, cartoonist, writer, and comics letterer, is a PhD student at the University of Illinois at Urbana-Champaign Graduate School of Library and Information Science, and a founder of Eye Trauma Studios (eyetrauma.net). His first published graphic novel, The Hole: Consumer Culture, created with artist John Jennings, was released by Front 40 Press in 2008. Along with Jennings, Duffy has curated several comics art shows, including Other Heroes: African American Comic Book Creators, Characters and Archetypes and Out of Sequence: Underrepresented Voices in American Comics, and published the art book Black Comix: African American Independent Comics Art and Culture. He has also published scholarly essays in comics form on curation, new media, diversity, and critical pedagogy.