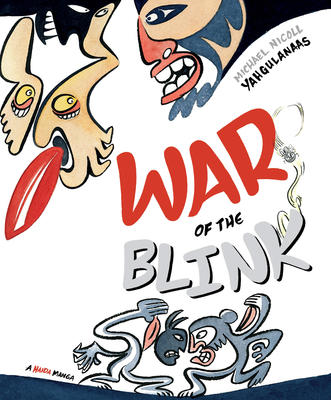 War of the Blink

$24.95
In Stock
By Yahgulanaas, Michael Nicoll
This has been added to your cart!
Something went wrong, please contact the Bookstore for assistance.

“This Haida manga intriguingly blends graphic storytelling with a fine art sensibility… Yahgulanaas communicates via an arresting series of images evoking the traditional visual arts of the Haida people.” —Publisher’s Weekly The brilliant follow-up to RED: A Haida Manga — another stunningly inventive retelling of an ancient Haida tale. The latest offering from acclaimed graphic artist Michael Nicoll Yahgulanaas, War of the Blink is a stunning full-colour graphic novel about war and peace. It is the story of a fisherman who suspects a party of raiders is descending upon his island home. When his warnings are not heeded, the man sets out to guard the village on his own, only to find himself caught up in a high-stakes game of kidnap and bluff. All this leads to a final showdown, in which one of the sides must blink first—and the villagers find a surprising way to save face and their home, and avoid bloodshed. Combining traditional Northwest coast and Japanese comic art in Yahgulanaas’ own, dizzingly original mish-mash, War of the Blink is a timeless fable about the bravery it takes to choose peace over war. An earlier version of the artwork was displayed at the Vancouver Art Gallery a part of the groundbreaking exhibition “Raven Travelling.” Review Quotes and Endorsements “Michael Nicoll Yahgulanaas has invented a new form of graphic storytelling seen in full colour in his beautiful new book …The intricate watercolour changes the whole experience of the book, from linear and fixed to all over and fluid. — Calgary Herald “Yahgulanaas blends … two distinct styles together into something wholly original.” — National Post “Fusing the bold primary colours and geometric forms characteristic of classical Haida visual art with the emotionally expressive cartooning style of Japanese manga ... the traditional Haida story, freighted with all the sombre inevitability of Sophocles, is told in 108 pages of spectacularly beautiful, hand-painted images.” —Vancouver Review “Red delights me beyond measure. Author and artist Michael Nicoll Yahgulanaas has created a new art form — Haida manga — that honours his heritage as well as the Japanese friends of his ancestors.” — FastForward Weekly