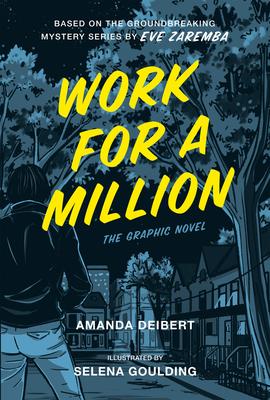 Work for a Million (Graphic Novel)

$24.95
In Stock
By Deibert, Amanda; Zaremba, Eve; Goulding, Selena
This has been added to your cart!
Something went wrong, please contact the Bookstore for assistance.

Tightly plotted and razor sharp, Work for a Million is hard-boiled detective noir stunningly rendered against a 1970s urban backdrop.

When Helen Keremos, Private Detective, is hired by a beautiful recording artist who has just won a million dollar lottery prize, her plan for a quiet life on the West Coast is quickly diverted. Helen is fiercely loyal, an independent woman whose magnetic personality and storied career make her the city's premier private eye, suspicious of all stereotypes and not afraid to bend the rules. Rising star Sonia Deerfield has been receiving blackmail threats from an anonymous caller, and though she is surrounded by her keenly invested business team of "friends," Helen wonders how trustworthy they really are. As the stakes get higher and attempts are made on their lives, the two women are drawn closer together through the twists and turns of the blackmailer's dangerous pursuit--and their chemistry is no mystery.

In 1978 Eve Zaremba introduced detective Helen Keremos to readers in a pulp fiction series. The 1987 instalment of the series, Work for a Million, featured the first openly lesbian detective in genre fiction. The novel was adapted into a graphic novel in 2019 by television and comic book writer Amanda Deibert, and will be published more than forty years after readers fell in love with Helen Keremos and Eve Zaremba.

Vivid historical research into Toronto of the late-1970s and a dazzling cast of familiars and foes are brought to life on the page by Canadian artist Selena Goulding in a mixture of full colour and black and white illustrations.

AMANDA DEIBERT is a New York Times bestselling comic book and television writer. Her comic book writing includes the New York Times bestselling series DC Super Hero Girls, Teen Titans Go!, Wonder Woman ’77, Batman and Harley Quinn, Sensation Comics Featuring Wonder Woman, Wonder Women of History, Flash Facts, The Doomed and The Damned, and Love is Love (NYT #1 Bestseller) for DC Comics, stories in John Carpenter’s Tales for A Halloween Night volumes 2, 3, 4, 5 & 6 for Storm King Comics, and various other comics for Dark Horse and IDW. Her television credits include work for CBS, SyFy, OWN, PIVOT, HULU, QUIBI, and four years as the writer for former Vice President of the United States Al Gore on his international climate broadcast, 24 Hours of Reality. She is currently writing for the animated series He-Man and the Masters of the Universe for Netflix. She lives in Los Angeles with her wife, illustrator Cat Staggs, and their adorable daughter, Vivienne.


EVE ZAREMBA is the author of six mystery novels featuring lesbian P.I. Helen Keremos. Active in the Women’s Liberation Movement in the seventies and eighties, Zaremba was a founding member of the Broadside Collective, which produced a monthly feminist paper in Toronto from 1979 to 1989. She has written articles and reviews in a number of other publications. In 1972, Zaremba selected and edited an early work of feminist non-fiction, The Privilege of Sex: A Century of Canadian Women (Anansi).

Born in Poland, Zaremba emigrated to Canada in 1952 after a stint in the United Kingdom; she graduated from the University of Toronto in 1963. Over the years, Zaremba has made a living in advertising, marketing, real estate, and publishing. While writing two of her novels, she ran a used bookstore in Toronto. Zaremba is a long-standing member of The Writers Union of Canada. She lives in Toronto with her spouse, Ottie Lockey, a filmmaker, arts consultant, and coach. Lockey commissioned the graphic novel adaptation of Work for a Million in 2017 and guided its development through a Kickstarter campaign and eventual publication by McClelland & Stewart.


SELENA GOULDING is a Canadian illustrator and comic book artist from Vancouver Island, currently living in Toronto. A graduate from the Sequential Arts Program at Toronto’s Max the Mutt Animation School, she is best known for her work on young adult indie comics such as Cobble Hill, publishing with 215 Ink. Susanna Moodie: Roughing It in the Bush was her first full-length graphic novel, based on a story by Carol Shields and published by Second Story Press in 2016. Her illustration work has also been showcased in the Dark Horse Comics anthology The Secret Loves of Geek Girls.