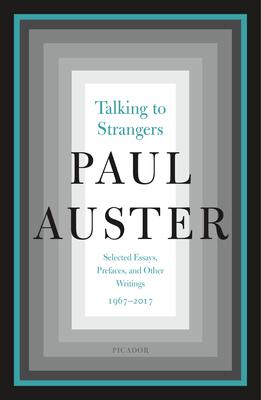 $26.00
Low In Stock
By Auster, Paul
This has been added to your cart!
Something went wrong, please contact the Bookstore for assistance.

Talking to Strangers is a freshly curated collection of prose, spanning fifty years of work and including famous as well as never-before-published early writings, from 2018 Man Booker Prize–finalist Paul Auster.

Beginning with a short philosophical meditation written when he was twenty and concluding with nine political pieces that take on such issues as homelessness, 9/11, and the link between soccer and war, the 44 pieces gathered in this volume offer a wide-ranging view of celebrated novelist Paul Auster’s thoughts on a multitude of classic and contemporary writers, the high-wire exploits of Philippe Petit, how to improve life in New York City (in collaboration with visual artist Sophie Calle), and the long road he has traveled with his beloved manual typewriter.

While writing for the New York Review of Books and other publications in the mid-1970s, young poet Auster gained recognition as an astute literary critic with essays on Laura Riding, John Ashbery, Samuel Beckett, Franz Kafka, Paul Celan, and others. By the late seventies and early eighties, as the poet was transforming himself into a novelist, he maintained an active double life by continuing his work as a translator and editing the groundbreaking anthology, The Random House Book of Twentieth-Century Poetry. His prefaces to some of these books are included in Talking to Strangers, among them a heart-wrenching account of Stéphane Mallarmé’s response to the death of his eight-year-old son, Anatole.

In recent years, Auster has pushed on with explorations into the work of American artists spanning various periods and disciplines: the notebooks of Nathaniel Hawthorne, the films of Jim Jarmusch, the writings of painter-collagist-illustrator Joe Brainard, and the three-hit shutout thrown by journeyman right-hander Terry Leach of the Mets. Also included here are several rediscovered works that were originally delivered in public: a 1982 lecture on Edgar Allan Poe, a 1999 blast against New York mayor Rudolph Giuliani, and one of the funniest introductions a poetry reading ever heard in the state of New Jersey.

A collection of soaring intelligence and deepest humanity, Talking to Strangers is an essential book by “the most distinguished American writer of [his] generation . . . indeed its only author . . . with any claim to greatness.” (The Spectator)

PAUL AUSTER is the bestselling author of 4 3 2 1, Winter Journal, Sunset Park, Invisible, The Book of Illusions, and The New York Trilogy, among many other works. He has been awarded the Prince of Asturias Prize for Literature, the Prix Médicis Étranger, the Independent Spirit Award, and the Premio Napoli. He is a member of the American Academy of Arts and Letters, the American Academy of Arts and Sciences, and a Commandeur de l'Ordre des Arts et des Lettres. He lives in Brooklyn, New York.