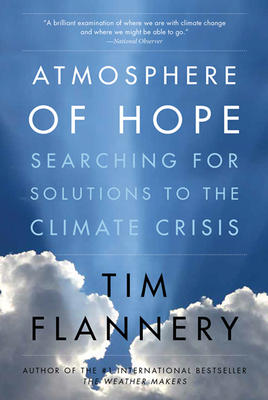 $19.99
Not In Stock
By Flannery, Tim
This has been added to your cart!
Something went wrong, please contact the Bookstore for assistance.

Earth’s climate system is fast approaching a crisis. Public understanding has not kept up with the debate, and there is an absence of political leadership. Many people are less engaged with the issue of climate change than they were a decade ago, and opinion is divided between technological optimists and pessimists who feel that catastrophe is inevitable. Tim Flannery, bestselling author and one of the most influential scientists on the planet, is here to tell us that catastrophe is not inevitable, but time is running out. Around the world people are already living with the consequences of an altered climate—with intensified or more frequent storms, heat waves, droughts and floods. For some it’s already a question of survival.

Atmosphere of Hope is both a snapshot of the trouble we are in and an up-to-the-minute analysis of some of the new possibilities for mitigating climate change, as well as an account of a future in which humanity is not dependent on fossil fuels, with the latest analysis of some of the emerging technologies for limiting global warming. Flannery outlines an exciting array of innovative approaches that give cause for hope, from atmospheric carbon capture—through extensive seaweed farming, CO2 snow production in Antarctica and the manufacture of carbon-rich biochar—to reflecting the sun’s rays by painting landscapes and cities white.

In his inimitable style, Tim Flannery makes this urgent issue completely accessible, a decade after the publication of his groundbreaking book The Weather Makers.