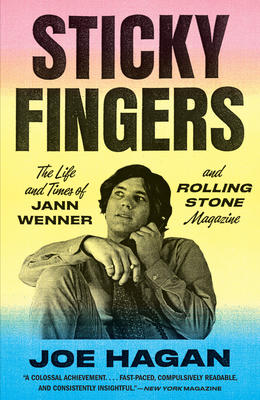 $24.00
Low In Stock
By Hagan, Joe
This has been added to your cart!
Something went wrong, please contact the Bookstore for assistance.

In his critically acclaimed biography of Jann Wenner--the iconic founder of Rolling Stone magazine--Joe Hagan takes us on a romp through the hothouses of rock and roll, politics, media, and Hollywood, from the Summer of Love to the Internet age.

Lennon. Dylan. Jagger. Belushi. Leibovitz. The story of Jann Wenner, Rolling Stone's founder, editor, and publisher, is an insider's trip through the backstages of storied concert venues, rock-star hotel rooms, and the political ups and downs of the latter half of the twentieth century, right up through the digital age.
Supplemented by a cache of extraordinary documents and letters from Wenner's personal archives, Sticky Fingers is the story of a mercurial, wide-eyed rock and roll fan of ambiguous sexuality but unambiguous ambition who reinvented youth culture, and marketed the libertine world of the late sixties counterculture in a stylish, glossy package that would stand for decades as a testament to the cultural power of America.
In stunning detail, Joe captures the extraordinary lives constellated around a magazine that began as a scrappy rebellion and became a locus of power, influence, and access--drawing on hundreds of hours of reporting and exclusive interviews. The result is a fascinating and complex portrait of Jann Wenner that is also a biography of popular culture, celebrity, music, and politics in North America over the last fifty years.

JOE HAGAN has written for New York, Rolling Stone, The Wall Street Journal, and many other publications. He has published long-form profiles and investigative exposés of some of the most significant figures and subjects of our time, including: Hillary Clinton (her first post-Secretary of State interview), Karl Rove, the Bush family, Henry Kissinger, Dan Rather, Goldman Sachs, The New York Times, and Twitter. He lives in New York with his wife and children.