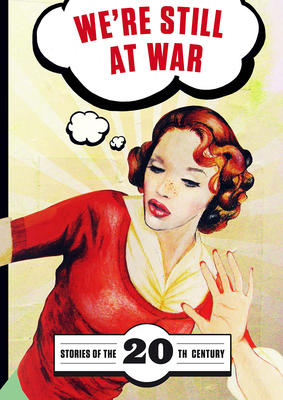 $46.75
Low In Stock
By Post Bellum
This has been added to your cart!
Something went wrong, please contact the Bookstore for assistance.

The Communist regimes of Europe collapsed more than a quarter century ago, and the Third Reich fell in World War II. However, today’s rising global tide of far-right extremism makes totalitarian regimes seem not a memory, but a possibility. In such a time, fear seems to trump hope. For any of us facing a world we no longer seem to recognize, the graphic novel We’re Still at War is a powerful reminder not just of where these sweeping forces can lead, but also of the human forces that can combat them.

Published in partnership with Post Bellum, a nonprofit organization devoted to documenting and sharing eyewitness accounts of the key events of twentieth-century Czech history, this book tells the stories of real people and their struggles under totalitarianism in Czechoslovakia. Bringing together thirteen of the top Czech and Slovak artists with thirteen victims and survivors of Nazi and Communist totalitarian regimes, We’re Still at War uses comics to open our recent, troubled past to a contemporary world. The narratives are as diverse and surprising as humanity itself, depicting victories and defeats, acts of weakness and heroism. The connecting thread, however, is clear: while the threat is real, it is more important than ever to remember the power of even the smallest moments of altruism and human kindness.

Subjected to the destructive power of totalitarianism, the heroes of these stories sacrificed everything to help others. For younger generations who have no memory of European totalitarianism and for those who witnessed it on either side of the Iron Curtain, for twentieth-century history buffs, and for comic book fans, especially admirers of Art Spiegelman’s Maus, We’re Still at War is a beautiful and enthralling testament to human endurance.

Founded in 2001, Post Bellum is a nonprofit organization that documents the memories of witnesses to important historical phenomena of twentieth-century Czechoslovakia and then relates these stories to the broader public. The testimonies are published at the online archive Memory of Nations: www.memoryofnations.eu.