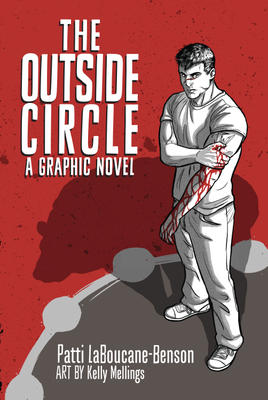 $19.95
Low In Stock
By Laboucane-Benson, Patti; Mellings, Kelly
This has been added to your cart!
Something went wrong, please contact the Bookstore for assistance.

In this important graphic novel, two Aboriginal brothers surrounded by poverty, drug abuse, and gang violence, try to overcome centuries of historic trauma in very different ways to bring about positive change in their lives.

Pete, a young Aboriginal man wrapped up in gang violence, lives with his younger brother, Joey, and his mother who is a heroin addict. One night, Pete and his mother’s boyfriend, Dennis, get into a big fight, which sends Dennis to the morgue and Pete to jail. Initially, Pete keeps up ties to his crew, until a jail brawl forces him to realize the negative influence he has become on Joey, which encourages him to begin a process of rehabilitation that includes traditional Aboriginal healing circles and ceremonies.

Powerful, courageous, and deeply moving, The Outside Circle is drawn from the author’s twenty years of work and research on healing and reconciliation of gang-affiliated or incarcerated Aboriginal men.

Patti Laboucane-Benson is a Métis woman and the Director of Research, Training, and Communication at Native Counselling Services of Alberta (NCSA). She has a Ph.D. in Human Ecology, focusing on Aboriginal Family Resilience. Her doctoral research explored how providing historic trauma healing programs for Aboriginal offenders builds resilience in Aboriginal families and communities. She has also been the recipient of the Aboriginal Role Model of Alberta Award for Education. She lives in Spruce Grove, Alberta.Kelly Mellings is an award-winning art director, illustrator, and designer. His work has appeared in comic books, magazines, apps, museum exhibits, and online games, and his clients include Microsoft. He is the co-owner of the acclaimed illustration, animation, and design firm Pulp Studios. He lives in Edmonton, Alberta.