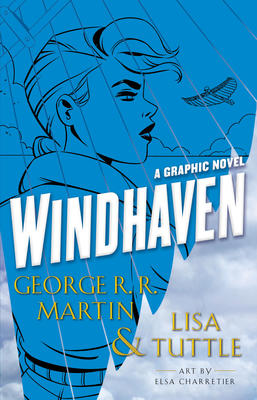 $36.00
In Stock
By Martin, George R R; Tuttle, Lisa; Charretier, Elsa
This has been added to your cart!
Something went wrong, please contact the Bookstore for assistance.

A full-color graphic novel adaptation of the first fantasy novel from the bestselling author of A Game of Thrones, co-written with Lisa Tuttle.

FOR SOME DREAMS, THE SKY IS NO LIMIT.

Among the scattered islands of the ocean-bound world called Windhaven, no one holds more prestige than the silver-winged flyers—humans borne on handcrafted wings who cross treacherous seas, braving shifting winds and sudden storms, to bring news, gossip, songs, and stories to Windhaven’s far-flung communities. Maris of Lesser Amberly is only a fisherman’s daughter, but as much a descendant of the star sailors who founded her world as the flyer family who adopted her. She yearns to soar high above the water on the sky’s buffeting currents.

But it is Maris’s stepbrother who stands to inherit the irreplaceable wings when he comes of age—though he dreams of pursuing a very different path. So Maris dares to challenge tradition and the law by demanding that flyers be chosen by merit rather than inheritance. Determined to establish flying competitions and training academies for those not of the flyer-born classes, she wages a bitter battle for change. But even as she triumphs, a host of new troubles confronts her. For a brewing revolution now threatens to destroy the world she fought so hard to join, and crush her proud, rebellious spirit—unless she is willing to make the ultimate sacrifice.

George R. R. Martin is the #1 New York Times bestselling author of many novels, including those of the acclaimed series A Song of Ice and Fire—A Game of Thrones, A Clash of Kings, A Storm of Swords, A Feast for Crows, and A Dance with Dragons—as well as Tuf Voyaging, Fevre Dream, The Armageddon Rag, Dying of the Light, Windhaven (with Lisa Tuttle), and Dreamsongs Volumes I and II. He is also the creator of The Lands of Ice and Fire, a collection of maps featuring original artwork from illustrator and cartographer Jonathan Roberts, and The World of Ice & Fire, with Elio M. García, Jr., and Linda Antonsson. As a writer-producer, he has worked on The Twilight Zone, Beauty and the Beast, and various feature films and pilots that were never made. He lives with the lovely Parris in Santa Fe, New Mexico.

Lisa Tuttle won the John W. Campbell Award in 1974 at the beginning of her career, and subsequently her short stories have won the British Science Fiction Award and the International Horror Guild Award, as well as being chosen for “Year’s Best” anthologies and nominated for Hugo and Nebula Awards. Her novels include Lost Futures, Gabriel, The Pillow Friend, The Mysteries, The Silver Bough and, most recently, the first two in a series of supernaturally tinged mysteries set in Victorian England: The Curious Affair of the Somnambulist and the Psychic Thief and The Curious Affair of the Witch at Wayside Cross. She has also written nonfiction and books for children. American-born, she now lives with her family on the west coast of Scotland, where the weather and scenery are similar to that of Windhaven.

Elsa Charretier is a French illustrator and comic book artist. She started out at Image Comics where she did an issue of COWL, before moving on to her own miniseries, The Infinite Loop, published by IDW. She has since worked on Starfire, DC’s Bombshells, and Harley Quinn for DC comics, and has joined Marvel on The Unstoppable Wasp new ongoing series.