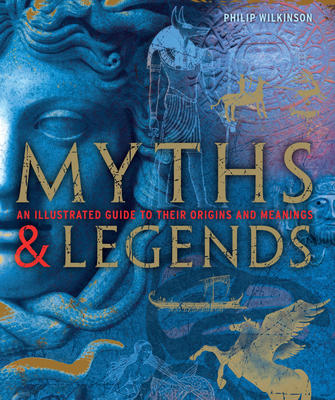 $34.00
In Stock
By Wilkinson, Philip
This has been added to your cart!
Something went wrong, please contact the Bookstore for assistance.

Myths & Legends retells the stories central to every culture that have been passed down from generation to generation for thousands of years. Coverage extends from the well-known tales of the Ancient Greeks, which hold the key to the origin of such phrases as "Achille's heel," to the lesser-known, but richly colorful, myths of the Americas and the East. Topic spreads explore characters and stories in terms of their cultural, psychological, and religious meanings and show their power, purpose, and influence both in their own time and in today's world. Feature spreads visit the sacred sites that can still be seen today, and underline the importance of themes that appear across cultures and through the centuries. In looking at such universal themes as creation, heroic trials, tricksters' lessons, and death and the afterlife, Myths & Legends investigates how different cultures have addressed questions such as How was the world created? How did man learn to use fire? and Why do we grow old?

Philip Wilkinson is a nonfiction author, educated at Corpus Christi College at Oxford. Since becoming an author, after a career as an editor, he has written more than 40 books, specializing in history, religion, architecture, and the arts. His books include LEGO Architecture: The Visual Guide, Eyewitness: Early Humans, Myths & Legends: An Illustrated Guide to Their Origins and Meanings, and Eyewitness: Mythology.