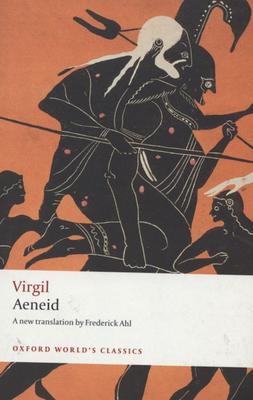 $15.95
In Stock
By Fantham, Elaine; Ahl, Frederick
This has been added to your cart!
Something went wrong, please contact the Bookstore for assistance.

'Arms and the man I sing of Troy...' So begins one of the greatest works of literature in any language. Written by the Roman poet Virgil more than two thousand years ago, the story of Aeneas' seven-year journey from the ruins of Troy to Italy, where he becomes the founding ancestor of Rome, is a narrative on an epic scale: Aeneas and his companions contend not only with human enemies but with the whim of the gods. His destiny preordained by Jupiter, Aeneas is nevertheless assailed by dangers invoked by the goddess Juno, and by the torments of love, loyalty, and despair. Virgil's supreme achievement is not only to reveal Rome's imperial future for his patron Augustus, but to invest it with both passion and suffering for all those caught up in the fates of others. Frederick Ahl's new translation echoes the Virgilian hexameter in a thrillingly accurate and engaging style. An Introduction by Elaine Fantham, and Ahl's comprehensive notes and invaluable indexed glossary complement the translation.

Frederick Ahl has taught at the universities of Utah (1966-8), Texas (1968-71) and Cornell, where he has been since 1971. He was a visiting fellow at the University of Otago, NZ in 1977 and at Durham in 1990 and has taught courses on Greek Theatre and staged performances of Greek Tragedy at the Athens Centre and College Year in Athens. He has published translations of Seneca and written on Lucan and Sophocles.