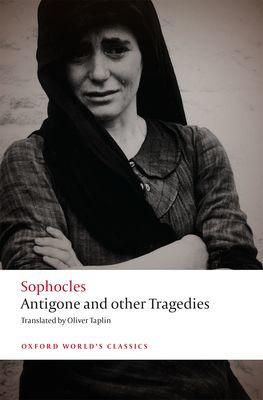 $5.95
In Stock
By Sophocles; Taplin, Oliver
This has been added to your cart!
Something went wrong, please contact the Bookstore for assistance.

Sophocles stands as one of the greatest dramatists of all time, and one of the most influential on artists and thinkers over the centuries. His plays are deeply disturbing and unpredictable, unrelenting and open-ended, refusing to present firm answers to the questions of human existence, or to provide a redemptive justification of the ways of gods to men or women. These three tragedies portray the extremes of human suffering and emotion, turning the heroic myths into supreme works of poetry and dramatic action. Antigone's obsession with the dead, Creon's crushing inflexibility, Deianeira's jealous desperation, the injustice of the gods witnessed by Hyllus, Electra's obsessive vindictiveness, the threatening of insoluble dynastic contamination... Such are the pains and distortions and instabilities of Sophoclean tragedy. And yet they do not deteriorate into cacophony or disgust or incoherence or silence: they face the music, and through that the suffering is itself turned into the coherence of music and poetry. These original and distinctive verse translations convey the vitality of Sophocles' poetry and the vigour of the plays in performance, doing justice to both the sound of the poetry and the theatricality of the tragedies. Each play is accompanied by an introduction and substantial notes on topographical and mythical references and interpretation.

Sophocles, born in the 490s BC, was a leading ancient Greek dramatist who composed as many as 120 plays in his long lifetime, although only seven survive. He entered and won many of the dramatic competitions held in honour of Dionysus, and was also a prominent public figure in the Athens of his day. Oliver Taplin retired in 2008 from being a Professor of Classics at the University of Oxford and, for thirty-five years, Tutorial Fellow at Magdalen College, Oxford. The leading recurrent theme of his work has been the reception of poetry and drama through performance and material culture, in both ancient and modern times. As well as his academic work, he has been involved in broadcasting and theatre, both within and beyond the UK. Productions on which he has collaborated include the Oresteia (1981-2, dir. Peter Hall), The Thebans (1992, dir. Adrian Noble), the Oresteia (1999-2000, dir. Katie Mitchell), and Swallow Song (2004 and 2006 dir. Lydia Koniordou).