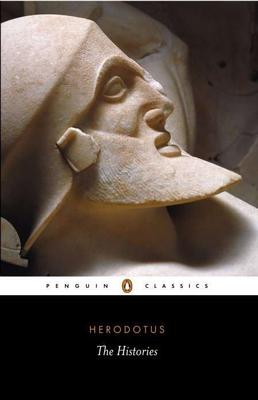 $17.50
In Stock
By Herodotus; Marincola, John M; De, Selincourt Aubrey
This has been added to your cart!
Something went wrong, please contact the Bookstore for assistance.

Translated by Aubrey de Sélincourt with an introduction and Notes by John M. Marincola.

For more than seventy years, Penguin has been the leading publisher of classic literature in the English-speaking world. With more than 1,700 titles, Penguin Classics represents a global bookshelf of the best works throughout history and across genres and disciplines. Readers trust the series to provide authoritative texts enhanced by introductions and notes by distinguished scholars and contemporary authors, as well as up-to-date translations by award-winning translators.

Few facts are known about the life of Herodotus. He was born around 490 BC in Halicarnassus, on the south-west coast of Asia Minor. He seems to have travelled widely throughout the Mediterranean world, including Egypt, Africa, the area around the Black Sea and throughout many Greek city-states, of both the mainland and the islands. A sojourn in Athens is part of the traditional biography, and there he is said to have given public readings of his work and been friends with the playwright Sophocles. He is said also to have taken part in the founding of the colony of Thurii in Italy in 443 BC. He probably died at some time between 415 and 410 BC. His reputation has varied greatly, but for the ancients and many moderns he well deserves the title (first given to him by Cicero) of ‘the Father of History’.

John Marincola was born in Philadelphia in 1954, and was educated at Swarthmore College, the University of Pennsylvania, and Brown University. He has taught at the College of the Holy Cross in Massachusetts, and at Union College in New York, and is currently an Associate Professor of Classics at New York University. From 1997 to 1999 he was Executive Director of the American Philological Association, and in 1999-2000 he was a Junior Fellow at the Center for Hellenic Studies in Washington, DC. He is the author of Authority and Tradition in Ancient Historiography (Cambridge, 1997), Greek Historians (Greece and Rome New Surveys in the Classics 31, Oxford 2001), and of several articles on the Greek and Roman historians. He is currently at work on a book on Hellenistic historiography.