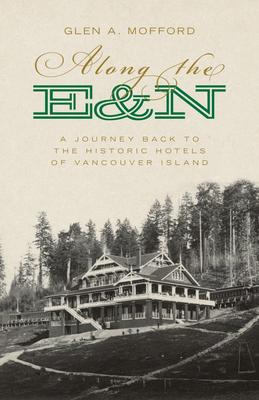 $22.00
Low In Stock
By Mofford, Glen A
This has been added to your cart!
Something went wrong, please contact the Bookstore for assistance.

An exploration of the fascinating history of more than thirty historic hotels—with some still in operation—nestled along Vancouver Island’s E&N Railway, spanning from Esquimalt to Campbell River.

In 1886, Vancouver Island’s E&N rail service was established to carry coal to smelters and ships, and the towns in the railway’s path prospered as the tracks expanded and passenger travel flourished.

Along the E&N celebrates the historic and still-surviving hotels and roadhouses that sprung up near the E&N. Within this carefully researched historical narrative, you’ll find stories of the Halfway House in the Esquimalt District, the murder and suicide at the Mt Sicker Hotel, and the iconic Quinsam Hotel in Campbell River, burned down in 2017. This book chronicles the history of more than thirty hotels―many long gone, destroyed by fire, or simply demolished, like the Lorne Hotel in Comox, and others that have been remodelled into modern-day neighbourhood pubs―such as the Rod & Gun in Parksville and the Waverley Hotel in Cumberland.

Peppered with the fascinating stories of patrons and proprietors alike, Along the E&N resonates with the haunting echoes of the train’s iconic whistle.