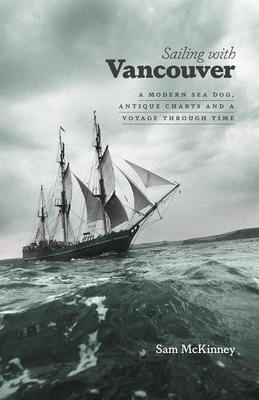 $20.00
Not In Stock
By McKinney, Sam
This has been added to your cart!
Something went wrong, please contact the Bookstore for assistance.

One man retraces the ancient voyages of Captain Vancouver alone in his sailboat in this updated edition of a classic travelogue.

As Sam McKinney retraced the explorations of Captain George Vancouver and his men from Puget Sound to Queen Charlotte Sound he wondered, "Could I have been one of them?"

In the 1790s, Vancouver’s crew rowed for long hours day after day, and camped on rocky beaches in all weathers to chart the intricate coastline for European colonial exploits. Two hundred years later, McKinney followed their ancient path in his 25-foot sailboat, anchoring where they did, meeting the same winds and waves, and sharing “the link of vulnerability that is the ever-present condition of all people who go to sea.”

McKinney offers insightful comparisons of what sailors saw and experienced, in the 18th century and today, around the Inland Sea. At the end of his trip he, like Vancouver, claimed the area he had explored, “not by deed of ownership but out of love for the place, its staggering beauty [and] the memories of the people and cultures who have found homes along its shores.” McKinney invites readers along on a perceptive voyage through time and along the magnificent, storied west coast.