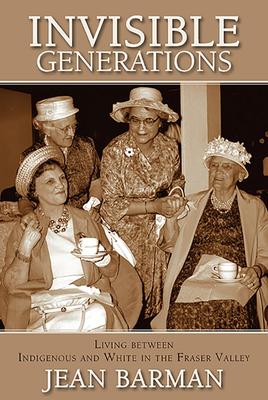 Invisible Generations: Living between Indigenous and White in the Fraser Valley

$24.95
Not In Stock
By Barman, Jean
This has been added to your cart!
Something went wrong, please contact the Bookstore for assistance.

Born of Indigenous grandmothers and white grandfathers, Irene Kelleher lived all her life in the shadow of her heritage. Her local community in British Columbia?s Fraser Valley treated her as if she was invisible. The combination of white and Indigenous descent was beyond the bounds of acceptability by a dominant white society. To be mixed was to not belong. Attracted to the future British Columbia by a gold rush beginning in 1858, Irene?s white grandfathers partnered with Indigenous women. Theirs was not an uncommon story. Some of the earliest newcomers to do so were in the employ of the fur trading Hudson?s Bay Company at Fort Langley and elsewhere. And yet, more than 150 years later, the descendants of these early pioneers are still struggling for their stories of discrimination and segregation to be heard. Through research, family records and a personal connection to Irene, Governor General award-winning historian Jean Barman explores this aspect of British Columbia?s history and the deeply rooted prejudice faced by families who helped to build this province. In INVISIBLE GENERATIONS, Barman writes of the Catholic residential school that Irene?s parents and so many other ''mixed blood'' children were forced to attend. We meet Josephine, a family friend who was separated as a child from her beloved upwardly mobile politician father. When her presence in his socially charged household became untenable, Josephine was dispatched to the same Fraser Valley boarding school. ''The transition from genteel Victoria to St. Mary?s Mission was horrendous,'' she wrote. Yet individuals and families survived as best they could, building good lives for themselves and those around them. Irene chose to be a schoolteacher, and taught many children including Doukhobor children at a time when the Doukhobor community was vehemently opposed to their children attending school. These stories along with many others have been largely forgotten, but in INVISIBLE GENERATIONS Barman brings this important conversation into focus, shedding light on a common history across British Columbia and Canada. It is, in Irene?s words, ''time to tell the story.''

Jean Barman is an award-winning historian and author of over a dozen books about British Columbian and Canadian history. Much of her writing attends to the stories and histories of Indigenous Peoples and to Canadian women and families. Her writing has garnered over a dozen Canadian and American awards, including the Governor General's History Award for Scholarly Research. She is professor emeritus at the University of British Columbia, a fellow of the Royal Society of Canada and the recipient of a Queen Elizabeth II Diamond Jubilee Medal. She holds graduate degrees from Harvard University, the University of California at Berkeley and University of British Columbia, and an honorary doctorate from Vancouver Island University. Jean lives in Vancouver, BC.