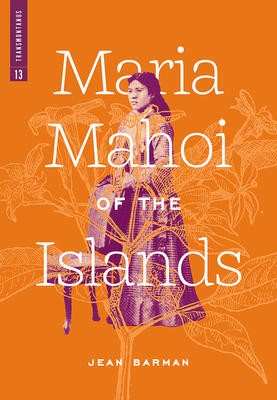 Maria Mahoi of the Islands

$19.00
Not In Stock
By Barman, Jean
This has been added to your cart!
Something went wrong, please contact the Bookstore for assistance.

Since its original publication in 2004, Maria Mahoi of the Islands has become a classic in its field, and an important document on the history of Indigenous Hawaiians known as Kanakas, who had an early presence across the Pacific Northwest and are now part of the broader Hawaiian diaspora across North America. Born in the mid‐1850s on Vancouver Island to an Indigenous Hawaiian father and an Indigenous British Columbian mother, Maria (pronounced Ma‐RYE‐ah) moved as a young woman to Salt Spring Island in British Columbia's Strait of Georgia, and in mid‐life to her very own nearby Russell Island. Now part of the Gulf Islands National Park Reserve, the island and Maria's home, overseen by descendants, are open to visitors. A true pioneer, Maria lived until 1936 and bore thirteen children, but also kept her father's surname and fiercely protected her interests, including a legal action to acquire Russell Island in her own name. Maria Mahoi's many descendants encouraged and facilitated the telling of her story in its original and now revised edition. Drawing on information that has come to light since the book's first publication?and sometimes as a result of it?Jean Barman has updated and expanded her account, and written a new Foreword talking about the life that the book has taken on. Maria Mahoi of the Islands was originally published as number 13 in the Transmontanus series.